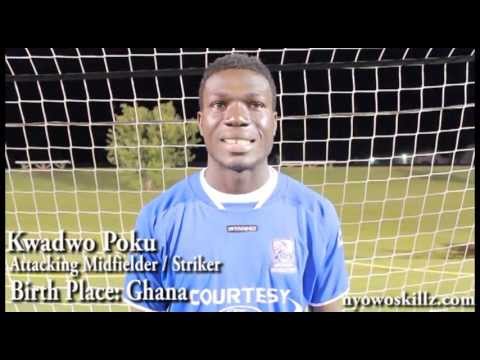 Forward? I thought he was a attacking mid or holding mid?

MagnusPax said:
Forward? I thought he was a attacking mid or holding mid?
Click to expand...

Excited to see him play! Hearing lots of good things about him.

After what I saw today he could be our Yaya Toure
Reactions: BlueWarrior, BlueFlash1895 and Tom in Fairfield CT

Lock him into a 15 year contract. I'm getting his jersey.
Reactions: DiRoma, SayWhat44, BlueWarrior and 1 other person

I wish I could see the full game today. I'm guessing Poku was awesome.

Nice write up on our secret weapon

I've been watching the full game and I'm starting to see what you guys mean about Poku.

Do you think holding or playmaking is his best spot?
Reactions: LostAnvil

MagnusPax said:
I've been watching the full game and I'm starting to see what you guys mean about Poku.

Do you think holding or playmaking is his best spot?
Click to expand...

MagnusPax said:
I've been watching the full game and I'm starting to see what you guys mean about Poku.

Do you think holding or playmaking is his best spot?
Click to expand...

I think he could play either spot, but he seems to have the tenaciousness to play DM

Tom in Fairfield CT said:
I think he could play either spot, but he seems to have the tenaciousness to play DM
Click to expand...

NYCFC needs him to excel at DM, because there is no true def mid in this team. Mix and others can play CAM. And Jacobson and even Ned can play the d-mid, but they need that dedicated lane-destroyer to make this diamond formation work.

Maybe Poku IS that guy, like many of you have already thought.
Reactions: kylelovescrayons

The comparisons to Yaya are spot on. He can pick up the ball on our half of the field and make a 60 yard run and then play a great ball or take a shot. He's got good feet and great vision and I think he's a steal
Reactions: Paul and Tom in Fairfield CT
T

MLS may have its own Yaya Touré in New York FC's Kwadwo Poku
The Ghanaian models himself on the Manchester City midfielder, and his potential is already being talked about

Stood in front of the camera, his sizeable frame taking up most of the shot, Kwadwo Poku looked nervous. There was a wry smile etched upon his face as his eyes danced from left to right.

“I really like Yaya Touré who plays for Manchester City,” he said smiling, before adding: “He is like my role model.”

Standing at over 6ft tall, it’s easy to see why comparisons between the Ghanaian born Poku and Touré have been made by both former team-mates and opponents alike.

Donning the sky blue kit of New York City FC for the first time on Tuesday night during his side’s comfortable 2-0 win over St Mirren, his unique blend of power and technique was certainly evident during a 45 minute run out.

Introduced in the second half, the 22-year-old was tasked with sitting deeper and anchoring the midfield in the centre – like a certain Mr Touré of Manchester. If those comparisons were strong before Tuesday, they will only increase now he is a representative of Manchester City’s cousin in New York.

A product of the Asante Kotoko academy, which has previously produced such Ghanaian talents as Leeds striker Tony Yeboah and Bayern Munich’s Samuel Kuffour, Poku moved to the United States in 2010. Initially plying his trade in the National Premier Soccer League (NPSL) with the Georgia Revolution, a strong showing in the US Open Cup against the nearby Atlanta Silverbacks afforded him the chance to play on a bigger stage.

The Silverbacks were forced to wait for their man, however. “We didn’t want to get the word out too much about him,” the Silverbacks general manager and president, Andy Smith, explained. In the process of acquiring a green card, Poku’s discovery late in the season proved poor timing for the team.

Eventually acquired ahead of the 2014 season, it was then that his true position became evident. “With the Georgia Revolution he was playing as a forward,” Smith explains. “That’s what we initially thought he was, but in a conversation it came up he was originally a holding midfielder and that he tries to model himself on Yaya Touré.”

It would also seem that is where Poku fits into the plans of Jason Kreis. Against St Mirren he confidently sprayed the ball from left to right before engaging in some driving runs in the final third, leaving both the commentators and viewers alike enthusiastic at what they had seen.

Thus it should come as little surprise that a quartet of MLS sides including the Chicago Fire and Real Salt Lake courted Poku during 2014, as he once again shone in the US Open Cup – netting the only goal in a win over RSL. Again besting MLSopposition in the the next round, Poku grabbed the headlines as he was harshly sent off for attempting to break up a fight late in the game against the Colorado Rapids.

It was also around this time that teams in MLS began to take notice. As Smith explains the eventual trade between New York and Seattle was the product of a “crazy” race to file a Discovery Claim: “It was who got that piece of paper in first,” he said.

The piece of paper in question is part of a league rule in which teams can claim they have discovered a player. Perhaps more interesting is Smith’s revelation that Seattle took the Ghanian on trial last year, but as he bluntly explains: “They offered us nothing for him, it was silly. They didn’t see it [his talent].”


That had further consequences. With Seattle’s offer of zero dollars up front with incentives still being considered a valid bid, it locked Poku in. For New York to procure him, not only would they have to deal with Atlanta put they would also have to satisfy Seattle’s demands - eventually sending a conditional draft pick in 2017 for the 22-year-old’s rights.

Smith is still surprised by the Sounders’ decision to allow New York to sign Poku. The Silverbacks GM is a considerable fan of his former midfielder, a player he describes as “raw” but also “a huge talent”.

Off the pitch, it would seem he is a positive influence too: “No one has a bad thing to say about him,” Smith explains. “He’s incredibly respectful. A gentle giant is a great way of putting it.”

Poku is far from the finished product and could still benefit from adding goals to his game – he scored just twice last season. If he can score more often, New York may have picked up one of NASL’s brightest talents in years.

Poku is currently at Manchester City’s extravagant training complex, and there is every chance the two men may train side by side this week as Touré returns from international duty at the same time as New York begin their pre-season schedule.

Manchester City have won just once this season in the league without the influential Touré, a sign of the importance of the Ivorian’s commanding presence in a team full of star turns. If New York City can utilise Poku to his optimum, they could reap the rewards of their own version of Touré.

Like the chat Yaya Toure and Poku have..
Reactions: MagnusPax

I propose his nickname should be Kwadzilla
Reactions: LostAnvil and Tom in Fairfield CT

D_RoyJenkins said:
I propose his nickname should be Kwadzilla
Click to expand...